Book Review: Just William Through the Ages by Mary Cadogan 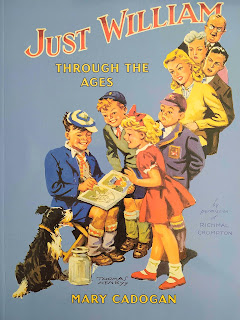 This luxuriously illustrated exploration of William Brown through his lifetime and beyond was a thoroughly researched and entertaining read.

The book begins with a foreword by Richmal’s niece, Richmal Ashbee (nee Disher (1929-2005)), that covers some insightful details about Richmal and the illustrator Thomas Henry. One such fact is that Richmal and Thomas Henry didn’t meet until 1958. While Richmal had no control over the illustrations, or the choice of illustrator, it is comforting to know that the two continued friendly correspondence until Thomas Henry’s death in 1962.

Mary Cadogan (1928-2014) starts with introducing us to our subject, a certain William Brown. Mary separates William’s changing identities into five themes, covering a decade each between the 1920s and the 1960s. While this doesn’t quite cover the publishing period of the stories, 1919 to 1970, it does cover the themes seen in all of the stories.
Starting with the 1920s, we have William the Innocent, a William that is illustrated as a small boy and it feels like Crompton is getting to grips with her “Frankenstein’s monster”, as she was known as saying; we also see that situations and characters in this first decade provide a robust foundation for the William of the upcoming decade.
The 1930s see William the Leader, he is by now the definite leader of the Outlaws. Ginger, Henry, and Douglas may still question their leader, but they always fall in line! More than once over this decade we find William softening in his approach to the opposite sex, sometimes completely besotted.
By the 1940s, it’s jolly good that William is the leader of the Outlaws, as the War has begun, and this is reflected well within the books. William attempts the activities of the adults in his village, attempting endeavours such as setting up a junior branch of ARP. There’s a fair bit of moaning about the lack of sweets – and their lack of quality – but they still do manage to have fun. Often Violet Elizabeth, although still considered a bit of a pain, provides the excitement in the lives of the Outlaws – and more importantly is always on their side.
Life changes in the 1950s with William the Expansive. Cadogan notes that the bleak days of war have gone and life is becoming more democratic. Even William’s family has changed. His parents are having to do more around the house, and Mr Brown is seen to be having fun with William during this decade.
By the 1960s – William the Campaigner – the restrictions of wartime had finally, and thankfully, retreated into the past. Things are steaming on, we have pop singers, psychiatrists, protest marchers, the NHS, and closer to home; a much-softened General Moult. The General has employed, and become friends with, Aaron Myson, who William safes from the old people’s home.

Cadogan completes this wonderful read with a short chapter on William as he heads towards the Millennium (this book was published in 1994). The was a lot going on for William in the 1980s and 1990s, which saw the complete release of all 38 books by Macmillan. The 1990s saw releases of some new books, such as this one, and a television series.

I would say that this is a must read for William fans. Mary Cadogan clearly knew these stories through and through and has managed to provide a context for them that had never really occurred to me. Sometimes Richmal introduced new themes, activities, or characteristics so gradually that I’d missed them. I’m certainly going to be paying more attention from now on!

In an attempt to try to reach as many people as possible, I've created a YouTube channel.

Just William Through the Ages
by Mary Cadogan
tagged: currently-reading and william

William the Lawless
by Richmal Crompton
tagged: fiction and william

William the Dictator
by Richmal Crompton
tagged: fiction and william

William The Showman
by Richmal Crompton
tagged: fiction and william